Censorship in the church: a synopsis of current affairs

I was hoping to podcast with a friend about freedom of speech this weekend, but I have been so grieved by all that is going on that I simply couldn't do it. I'm very sensitive and much of this is personal to me. I've been attacked online once or twice for talking about public things publicly, and I can't handle seeing others attacked as in sin for talking about issues.  I just can't handle another flurry of nastiness. But some things need to be said and said publicly. I wrote down my notes to focus the things I wanted to say during the podcast and I want them out there so many people of God know they are not the only ones who feel this way.  We must no longer put up with anyone who bullies us. Jesus is gentle and humble of heart and the meek will inherit the earth. 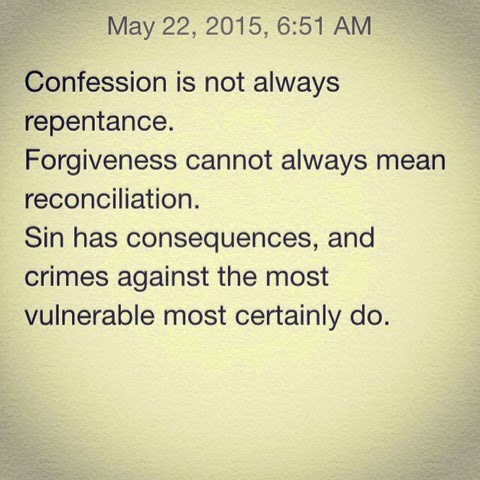 The following is my personal opinion based on what I have observed on Twitter and throughout a lifetime of involvement in the institution known as church.

The church is notorious for covering up sin in the name of forgiveness or grace: think SGM/CJMahaney/in court testimony that the SGM leadership team knew of sexual abuses and did not report to police-yet TGC talks both sides of mouth about child sex abuse and their friend CJ. Thankfully only three members of TGC put their name to that disgusting statement. However the PR job they've been doing saying people who use h/t Istandwithsgmvictims are "exploiting victims" is absurdity. The institutional church wouldn't listen, so this h/t was a way of validating suffering never acknowledged by SGM or anyone else in the conservative Christian world for that matter. The wording of the statement was in fact dismissive and derogatory to victims "please do not hear us saying we assume all of the plaintiffs are lying" I mean come on. I'm a linguist and guess what that implies? Not all are lying, but perhaps some. I mean gimme a break. That's hurtful however you cut it.

Then you have among other issues, emergent "Christian" Tony Jones. Again, another person with a following gets to control the story at the expense of his ex wife who he has clearly abused by infidelity and by painting her as crazy while he is a diagnosed Narcissist. And when he's called on it he tries to get people talking about it to shut up. Sorry mate, opinion is protected speech as far as I am aware. And yes, that is my opinion.

Then you have the whole Mark Driscoll fiasco. I got reprimanded for talking about that online by a British pastor friend who used dubious scripture references and yet an Acts 29 pastor friend told me he'd never tell anyone to stop sharing an opinion. I thought that was ironic. Or perhaps an interesting cultural commentary.

Which brings me to Acts 29. Oh boy. Let me say this. IMO Mark Driscoll is a bully and their theology is entirely off particularly when it comes to authority. I've heard the A29 teaching on church membership, elder authority, and divorce and it was a set up for potential abuse. We couldn't take it anymore even though my husband and I loved the people at a local A29 church so we moved churches right around the time A29 dumped Mars Hill. It was all downhill from there...honestly I felt A29 did the right thing belatedly and in the wrong way. I felt they were more concerned about the image Mark had tarnished than with Mark himself. Mark Driscoll should never be in leadership over others unless he can see he himself needs to he forgiven for abuses of power. Instead he tells people he forgives all those who apparently slandered him! However, I don't think A29 has ever dealt with the bad authority teachings that led Mark to his bullying style of leadership and I think that is borne out in this latest scandal from The Village Church.

Everything I'm hearing about TVC telling a woman she must submit to the elders and stay married to a pedophile until they are ready to tell her to divorce him is consistent with the bad teachings I heard in an A29 church. It's sad but doesn't surprise me. Acts 29 and incidentally many churches are far too controlling, in that authority is vested in the elders, and not in the whole Body of Christ.  The story with the woman who annulled her marriage without church consent is shocking, but points to the cult mentality of these churches, which they back up with legally binding membership agreements known as covenants.  This woman submitted to her mission board by informing them of child sex abuse images-part of the priesthood of believers if you will, the laws of the land, per Romans 13 if you will, and her church did not support her getting away from someone who admitted to an ongoing problem.

Here's what common sense says if your spouse is found to be into child abuse images or physical sexual abuse: you call the authorities, you get a lawyer, you get a divorce, you warn the parents, you grieve the betrayal. Your church should support you through that. But in this case, TVC/ A29 teaching wanted to preserve the marriage at the expense of the person. And this happens all the time. I know of a few other cases where to churches marriage was more important than protecting the innocent party or parties. This leaves individual people of God without the support of the people of God, following God, but without corporate support. It's abusive of churches to do this yet they are "perplexed" that anyone would see it that way. 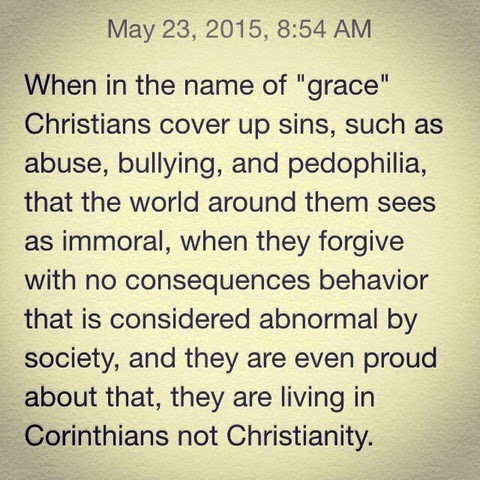 And don't even get me started on the Duggars handling of their situation or Mike Huckabee's disgraceful comments. I'll just say that I saw sex abuse survivors who spoke up and told him how hurtful his "let's move on nothing to see here" silencing was. He deserves to lose and that isn't about politics (I am a registered Republican). I will not vote for anyone who publicly supports abusers and enablers over grieving for and if possible with the victims.  This is the kind of rank arrogance we are seeing or experiencing all over the church today. It's the kind that can extend cheap grace to abusers, or public bullies like J D Hall or Chuck O'Neal or Tony Miano or Mark Driscoll or Tony Jones, supporting them having a platform whether in the pulpit or on Twitter to hurt others, yet ignores the ordinary many, who need understanding and support, or worse, attacks and further abuses them. 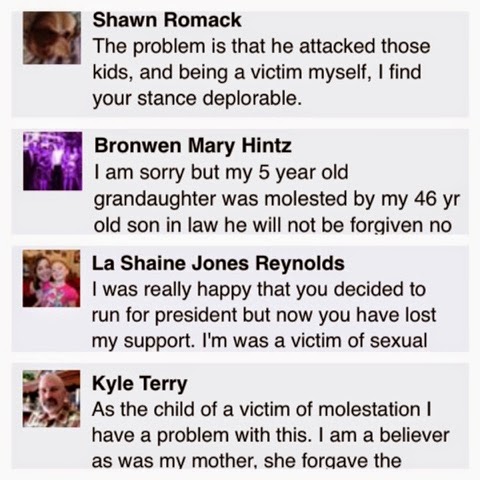 So yeah, we have a real problem of who gets to exercise their freedom of speech these days.  I don't think the solution is so much for governments to create laws that penalize hate speech but more that citizens and especially members of the Church of whatever denomination should take responsibility to stand up against abuses of power by talking about problems publicly. I don't think we fix dysfunction by catering to the status quo. I think dysfunction can only be addressed by honesty and a reality check, and systems and people take time to change.  I don't think people come out of the fog of domestic or spiritual abuse or cults or fear of lawsuit without a process of being exposed to, then opening up to, the contrast of facts or truth against what they have falsely believed.

Posted by The Blog bites better than the Bullet. at 1:55 PM No comments: